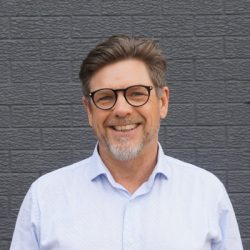 Big idea pioneer David Porter envisions a world where our $10 trillion project construction industry is no longer burdened by cost and time overruns. David said it’s the typical story we see in the media; massive infrastructure projects running millions or billions of dollars over budget and years late.

“These projects inevitably become the focus of political and media scrutiny, and so they should. If airlines had the track record of major projects, there wouldn’t be an airline industry,” David said.

Project construction accounts for 21 percent of GDP in Australia, according to research by The Australian Institute.[1] A 2016 report by The Grattan Institute also found that over a period of 15-year, Australian Governments spent $28 billion more than they told taxpayers they would spend.[2]
David said things have not improved since then with the Sydney Light Rail project blowing out by $1.1 billion and a looming dispute on the Melbourne Metro Tunnel project of over $2 billion.

“People are cynical about cost and time forecasts for major projects and with good cause. Take Sydney Light Rail as an example. That overrun would fund two regional hospitals, or more than 50 schools. That’s the impact of major project overrun.”

Arup’s Future of Project Management report states the construction industry’s spending on investment in information technology is less than just 1 percent of its revenue.[3] Overall, construction is seen as lagging behind other industries in the adoption of new digital technologies but could be one of the major opportunities for increased productivity.[4]
McKinsey Global Institute agrees, predicting in a recent report that the implementation of technology best practices in construction could improve productivity on projects by 15 percent and have a costs savings of up to 6 percent.[5]

“Despite the proven ability of new technologies to lift productivity in other industries, such as in the medical, aviation and manufacturing fields, the construction industry lags significantly in its use and adaptation of innovative methods and technologies,” David said.

“There is a huge opportunity for increased productivity in major projects, and I believe that can be done through the adoption of technology, and artificial intelligence more specifically. “

David has held senior positions on major project boards and large infrastructure projects. He established one of Queensland’s leading project management consultancies which over a 20-year period managed many major projects for both the public and private sectors.

“In 2015 I sold the consultancy as I wanted to see what best practice globally really was, and to do that, you have to get out of Australia and see what is happening around the world,” he said. “I was accepted into the prestigious MSc Major Programmes at University of Oxford which really opened my eyes and gave me a truly global view. Equally important was the opportunity to collaborate with leading academics and my colleague Cuong Quang to bring artificial intelligence technology to solve the time cost overrun problem.”

He founded Endeavour Programme in 2018 and brought together collaborators from around the world to commercialise the AI platform which emerged from the collaboration at Oxford.

“What we are doing is changing the way projects are delivered, and the results so far are pretty remarkable.”

David said large projects have become so complex with so many dynamic interdependencies and stakeholders, that managing them with traditional methods is no longer reliable, but the data-driven approach to project management provides the opportunity to better manage projects of any kind globally.

“The increasing complexity of projects, combined with human limitations, is at the root of the problem,” he said. “We’re aiming to lead the way in adapting this new technology, which we call Octant AI, and we’re seeking to make a measurable change to the performance of mega-projects globally.  It’s a big challenge but with over two trillion dollars in construction project overruns annually, there is a lot of benefit to be had.”